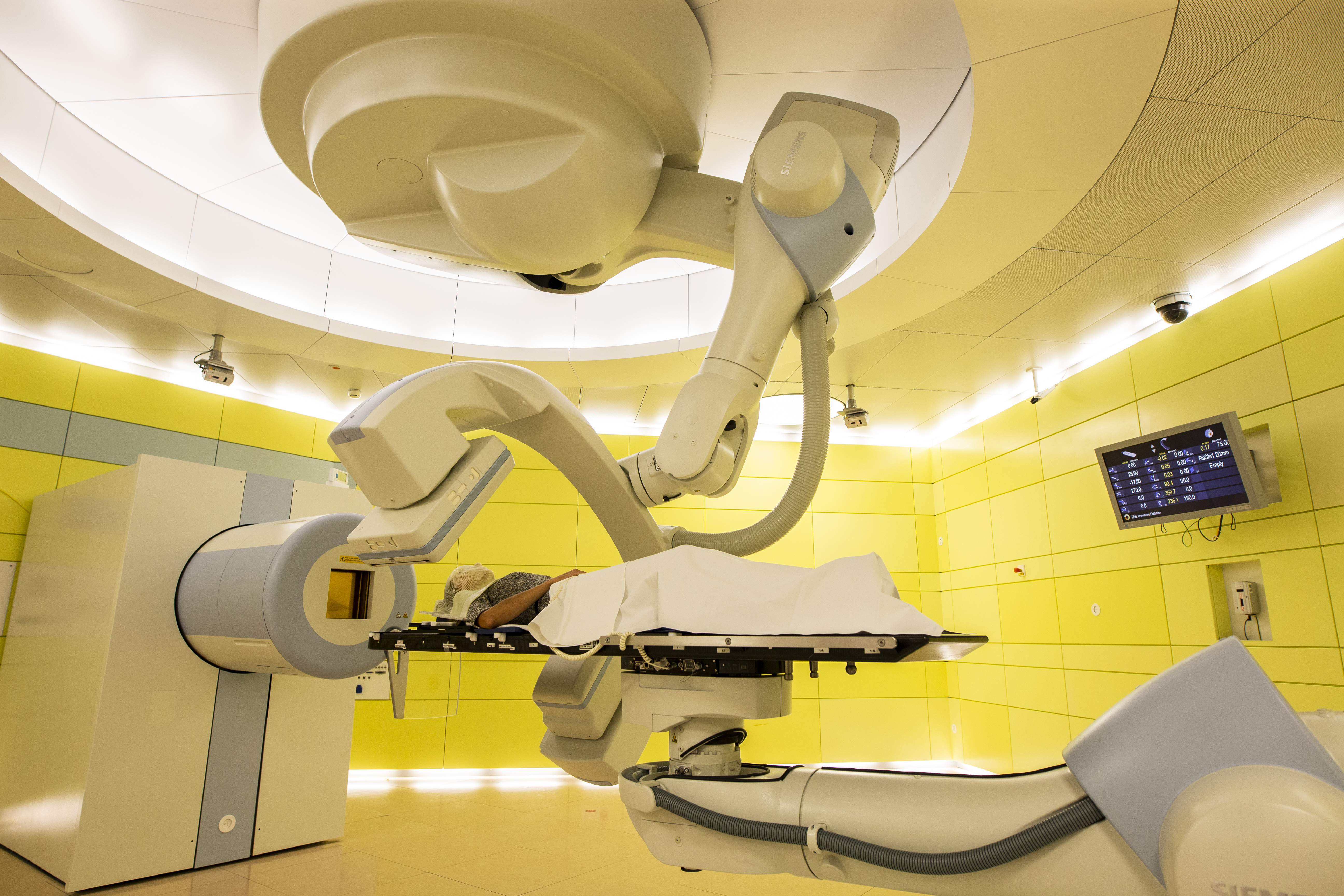 18.1 million new cases: That was a recent WHO International estimate for the Global Cancer Burden. In Germany, alone, experts estimate there will be 500,000 this year. However, with the right therapy, many of these cancer patients have a strong chance to recover. New treatment options are part of this survival story. As one example, since 2015, the Marburg Ion Beam Therapy Center (MIT) has been offering tumor patients a gentle alternative to conventional radiation (x-ray) therapy: this newer approach is known as particle therapy. Thanks to particle therapy, the doctors at the MIT are achieving sensational success with their patients – as was the case with Harald Thamm.

It was a routine dental check-up that changed Thamm’s life. Doctors happened to diagnose a palate tumor approximately the size of a golf ball. A difficult decision had to be made quickly about how to treat this delicate part of the body: surgery or radiation? The decision was made for particle therapy at MIT. The advantage of this special radiation therapy is that the beam is directed at the tumor tissue with millimeter precision. The particles are accelerated in such a way that they precisely deliver their effect at the predetermined depth, i.e. in the tumor. Surrounding tissue is thus largely unaffected. This precision is particularly important in treating tumors that are located next to highly radiation-sensitive organ structures.

What happens during photon irradiation?

In “conventional” photon irradiation, the tumor is irradiated with light particles. These consist mostly of x-rays. Particle therapy is different: Here, protons and heavy ions are used for the irradiation. This type of irradiation causes damage to the DNA of the tumor cells. When the therapy is successful, these cells will die. Unlike other forms of therapy, particle therapy makes it possible to protect surrounding tissue thanks to the high precision of the electrical particles and simultaneously high radiation dose. Depending on the clinical picture, particle therapy can be carried out as the sole treatment or as a supplement to photon therapy, as a “boost therapy.” It is also possible to combine particle therapy with surgery or drug treatment.

0
new cases of cancer are estimated by experts for 2020 in Germany.

Because treatment via particle therapy is effective and comes with the side effects are comparatively low side effects, in recent years, particle therapy has become established as an effective treatment option. This therapeutic approach is particularly beneficial for children, as long-term growth and developmental effects can be avoided. Along with the MIT, there is one other particle therapy facility in Germany, located in Heidelberg, that also uses carbon ion therapy technology. Before each patient is treated at the MIT, an interdisciplinary tumor conference is led by Professor and Dr. Rita Engenhart-Cabillic, Director of the Department of Radiotherapy and Radiooncology UKGM and Medical Director of the MIT, where each patient is be presented and discussed at the University Hospital Giessen and Marburg. All hospital departments are represented so that the maximum of professional skills are made available to the patient. Depending on the type, size and location of the tumor, the course of therapy is determined at the tumor conference.

At MIT, depending on the type of cancer, protons (hydrogen atoms) or heavy ions (carbon atoms) are used for radiation therapy. The particle energy ultimately required for a treatment is achieved in a particle accelerator, a synchrotron with a diameter of about 22 m. With the help of magnets, the ions are accelerated to up to 75% of the speed of light before they are diverted to the respective treatment room and to the patient. Harald Thamm was fortunate: He survived thanks to particle therapy. In view of the tumor’s size and location, the doctors had to act immediately, but it was also quickly clear that the tumor should not be cut out through a standard, and enormously complex, approach, which would have been an operation in which the tissue would be removed from the thigh to reconstruct Thamm’s palate. Thamm would then have to be artificially fed for weeks and would also have to relearn how to speak. Together with his doctors, Thamm decided to have the tumor treated via particle therapy at MIT, as one of their first patients. With the help of carbon ion therapy, the doctors not only saved Thamm’s life, but also saved him from weeks of pain and a long rehabilitation process. Their decision was a success: The radiation treatment worked. Thamm has now been cancer-free for three years. He also felt no pain during his treatment and experienced very minimal side effects. It’s outcomes like this that are paving the way for particle therapy to become a doctor and patient’s ally in the fight against cancer.

The Marburg Ion Beam Therapy Center (MIT) has been providing an innovative technology for the treatment of tumors since 2015. For irradiation, the doctors use charged ions instead of the usual photons used in radiation therapy. This ion approach has an advantage: Tumors that are difficult to reach can be irradiated precisely. The protons and ions also avoid damaging organs that are not surrounding the tumor, such as the lungs or heart.