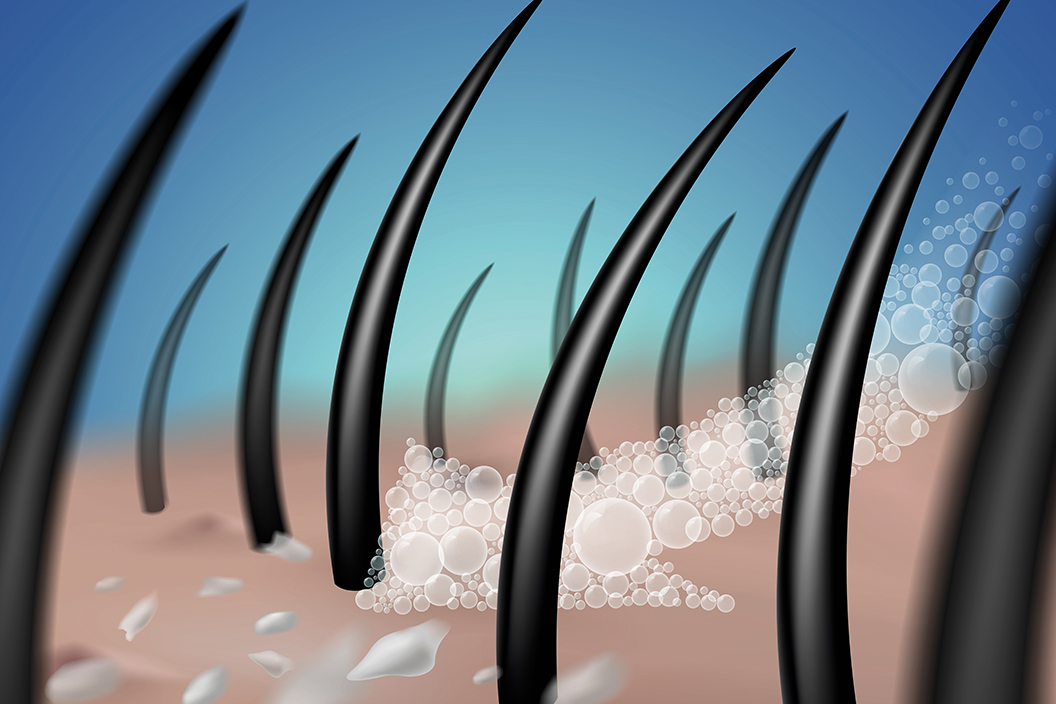 A natural remedy against dandruff without typical side effects has long been sought in vain by those affected. But this could soon change: Dermatologist and Professor Dr. Peter Mayser from Giessen has succeeded in developing a naturally-based active substance that effectively reduces dandruff. His research success could enable cosmetics manufacturers to stop using synthetically produced active ingredients that have been commonly used until now. Mayser’s product, marketed by Symrise AG – a global supplier of cosmetic ingredients – will be under the name Crinipan® PMC green.

Conventional anti-dandruff shampoos often contain synthetically produced antimycotics such as piroctone olamine or zinc pyrithione, sometimes combined with other active ingredients. However, these conventional anti-dandruff agents are often only partially environmentally friendly, and they upset natural bacterial flora. These ingredients can also cause allergies and lead to further side effects such as inflammation, skin irritation and irritation or permanently itchy scalp.

A yeast fungus with an anti-dandruff effect

In contrast, the specific mode of action of Mayser’s new anti-dandruff agent uses biological effects of the yeast fungus Malassezia, which, paradoxically, is also the cause of dandruff. Malassezia yeasts belong to the normal physiological skin flora of humans. However, they are also known to cause various skin diseases. Numerous cosmetic problems and skin diseases in humans and animals such as dandruff are Malassezia-associated diseases. They are caused by excessive colonization of the scalp by Malassezia yeasts.

In contrast to conventional antimycotics, the biological agents identified in Prof. Mayser’s invention are only activated by metabolic processes of the Malassezia yeasts. Thus, they only unfold their effects when an excess of Malassezia yeasts is actually the cause of existing dandruff. It may also be proven that this active ingredient has a beneficial effect on the remaining microflora of the scalp and has a nuturing component. With the exception of some multifunctional ingredients, this novel mechanism of action is the first innovative anti-dandruff active ingredient in decades, according to its manufacturer, Symrise.

“I am very pleased that the many years of constructive research and development work in cooperation with Symrise have now resulted in an effective and, at the same time, harmless and environmentally friendly anti-dandruff agent,” emphasizes its Giessen inventor, Prof. Peter Mayser. “In addition, the therapy of all Malassezia-associated diseases is also faced with the problem of resistance formation,” Mayser continues, “and this is also increasingly observed in this yeast fungus. Some Malassezia strains are already resistant to proven antimycotic drugs. There is, therefore, a great need for our non-toxic compounds in other areas for the treatment of Malassezia-associated diseases.”

Prof. Peter Mayser is head of the TransMIT project area for diagnostics and therapy of mycoses (fungal infections of the skin). During his work as senior physician at the Clinic for Dermatology, Venerology and Allergology at the University Hospital Giessen and Marburg (UKGM), he received several awards for his research results in the diagnosis and therapy of human fungal diseases.

Symrise AG is a global supplier of fragrances and flavors, cosmetic ingredients and functional food ingredients. Its customers include perfume, cosmetics, food and beverage manufacturers, the pharmaceutical industry and producers of dietary supplements and pet food. The group, headquartered in Holzminden, Germany, is one of the world’s leading suppliers and is represented by more than 100 subsidiaries in Europe, Africa and the Near and Middle East, in Asia, the USA and Latin America.